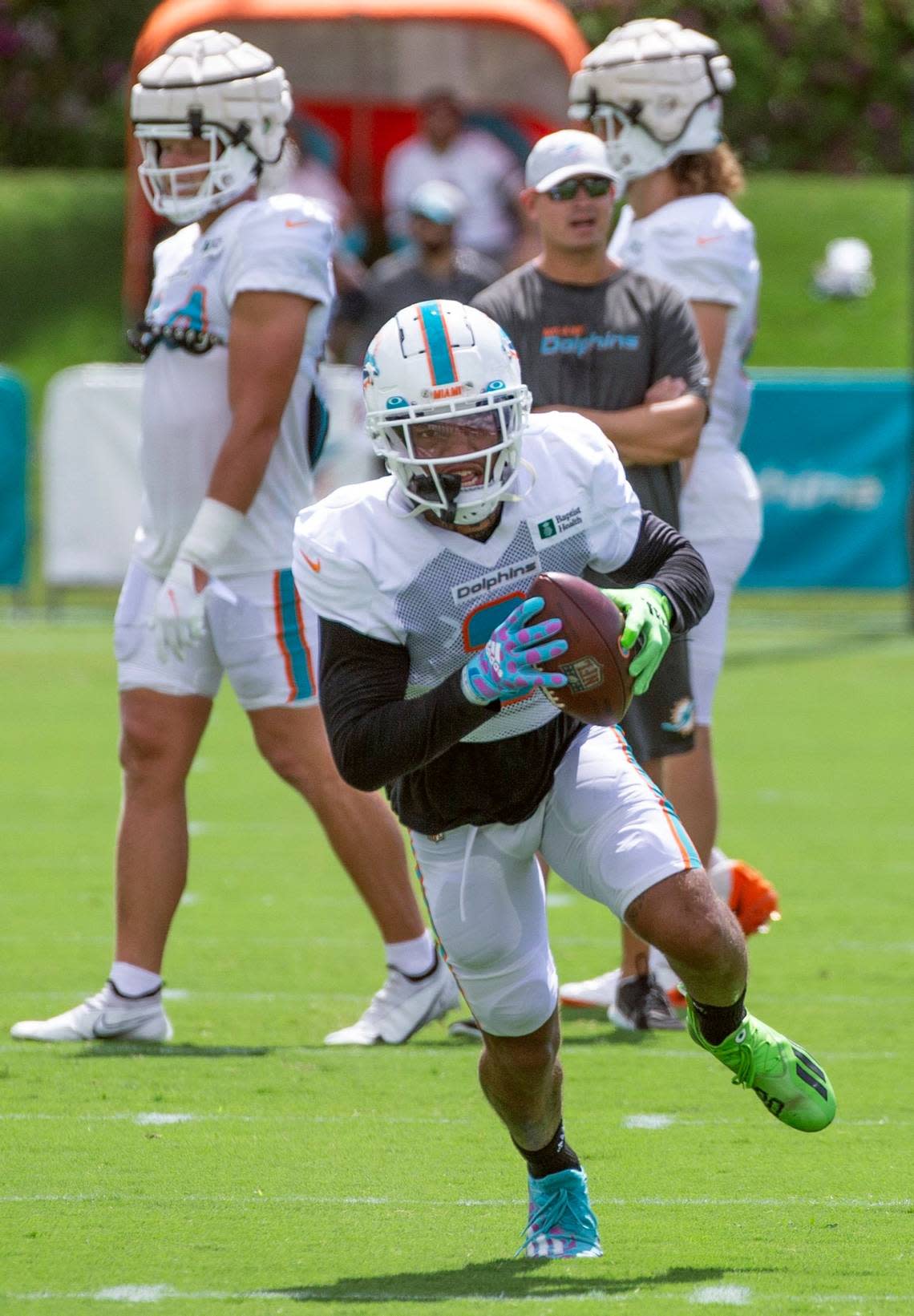 Day 8 of Dolphins training camp featured more excellence from Tyreek Hill, the defensive line which had another day’s attack on the offensive line and sharp throws from Teddy Briddgewater.

STARS OF THE DAY

This is a recording. After sitting still on Wednesday as part of the veteran maintenance program, he caught a 20-yarder over center early in practice, then caught a short pass from Tua Tagovailoa in the back of the end zone and another short pass from Skylar Thomas in front. a touchdown. Then he caught a pass from 25 meters from Tagovailoa.

The backup quarterback had several sharp throws for some distance.

Emmanuel Ogbah, Christian Wilkins and Zach Sieler had good days against the run, and Nebraska rookie Ben Stille has had some good moments. Ogbah and Wilkins each had pockets.

GAMES OF THE DAY

▪ Bridgewater delivered a rocket to Hill across the middle for a 20-yard gain, beating Tino Ellis

▪ Bridgewater showed a good touch on a 25-yard pass to Braylon Sanders.

▪ Yet another Bridgewater game! On this he scrambled for six seconds, avoiding a pass rush, then found Hunter Long over the center for a long win.

▪ Understanding Center Connor Williams continues to be work progress. No one has sailed over a quarterback’s head or rolled to the ground, but he had two very high snaps on Friday. The second resulted in a possible looting of Noah Igbonighene. The first disrupted a running game a bit.

Dolphin coaches this week praised Williams’ work in transitioning from left hat (on the Cowboys) to center on the Dolphins.

▪ Ogbah passed by Austin Jackson – who has had a solid camp – for a sack. A Jevon Holland blitz forced a quick throw – and incomplete pass – from Tagovailoa to Mike Gesicki.

▪ Rookie quarterback Skyler Thompson knocked over Braylon Sanders in the end zone and was off on another pitch. But he gathered to deliver a 20-yard to Cedrick Wilson Jr. in the middle of the field.

▪ ZaQuandre White, the South Carolina rookie walking back, keeps blinking. He took a carrying bag to the perimeter for a big game. He is more likely for the practice squad than the 53, but he has a great chance to beat Myles Gaskin and Salvon Ahmed for the No. 4 job.

▪ Safety Eric Rowe put out a Salvon Ahmed carry for a minimal win, and Jaelan Phillips stood up to Edmonds for another run. Ogbah held Raheem Mostert to a short win on another point, and Cameron Goode stood up to Gerrid Doaks without a win.

But there were also a handful of hefty gains on hasty attempts by Chase Edmonds and a long run by Mostert as he hit the hole very quickly.

▪ The Dolphins have tried to get Preston Williams more involved, but without much luck. On the third down of a red zone practice, Bridgewater threw a low pass to him that was incomplete.

▪ Recipient Mohamad Sanu caught a nice pass from Tagovailoa during recuperation/defensive practice and celebrated with a group of young children attending training, patiently waiting for them to return the football to him.

▪ Linebacker Andrew Van Ginkel wore the orange practice jersey that was awarded to the best player during the previous practice. Wednesday he had two bags.

▪ Porter Gustin, the former Browns linebacker, had a bag of Tagovailoa. He’s had quite a fight.

▪ The Dolphins have been careful with Terron Armstead after minor knee surgery out of season. The Pro Bowl left tackle hasn’t played a ton of 11 on 11 snaps this camp yet, but when he does — as he did on Friday — you can tell the difference in the run play and pass protection on his side. Armstead has never played a full season but needs to stay healthy.

▪ Fullback Alec Ingold, who came back from last year’s ACL injury in week 10, was in a red non-contact jersey.

▪ Tyreek Hill, Chase Edmonds and Terron Armstead were back in training on Wednesday after a maintenance rest day. Raheem Mostert, who worked his way back from week 1 knee surgery last season, got some 11 out of 11 jobs and is no longer in a red non-contact jersey.