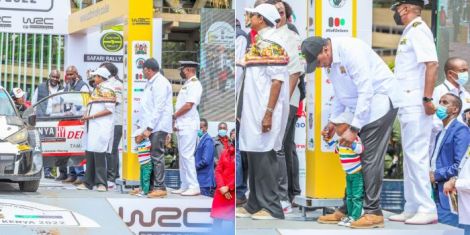 President Uhuru Kenyatta was spotted with his grandson at the launch of the World Rally Championship (WRC) Safari Rally.

The head of state was spotted introducing his grandson to French megastars Sebastian Ogier and Sébastien Loeb during the launch, Thursday, June 23, 2022, at the KICC.

President Kenyatta’s grandson, who is also called Uhuru, was with his father Jomo, at the WRC Safari Rally and they were seen cheering as the safari rally vehicles sped away from KICC.

President Uhuru Kenyatta and his grandson at the launch of the World Rally Championship (WRC) Safari Rally, Thursday June 23, 2022.

Images of the president and his grandson were shared online and TSWT on Twitter couldn’t help but gush about how cute young Uhuru looked.

Young Uhuru wore a white cap while his grandfather wore a black one and the two were chatting before the flag started.

The president has three grandchildren, including Uhuru, who turned two last month. Jomo’s other child, Wanjiru, is five years old while the youngest grandchild, Ngina Kenyatta, was born in September last year.

President Kenyatta was hailing the superstars who will take part in the four-day event which started in Nairobi and heads towards Naivasha.

From KICC the cars were driven to Moi International Sports Center Kasarani for a super special stage before heading to Naivasha where they will battle through 18 competitive stages.

”We are proud to host this famous event. The event attracts millions of fans and is considered one of the toughest events in the WRC series. The event unifies all walks of life in Kenya. Competition is not enmity because it brings us all together,” the president said.

“The rally contributes over 6 billion shillings to our economy. Thanks to the FIA ​​for their support. Thanks to all the drivers and the best in the competition.” 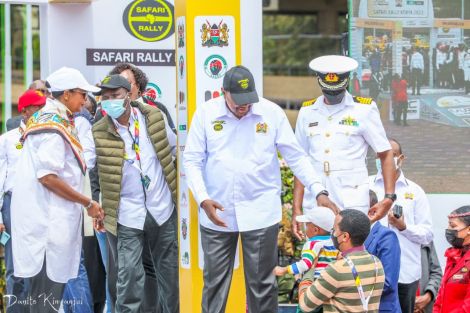 President Uhuru Kenyatta and his grandson at the launch of the World Rally Championship (WRC) Safari Rally, Thursday June 23, 2022.

McRea Kimathi and Mwangi Kioni of Kenya were the first crews to be appointed by President Kenyatta.

They were followed by Maxine Wahome and Waigwa Murage. Sean Johnston and Alexander Kihurani (Citroën) were the first foreign crews to fly under the flag.