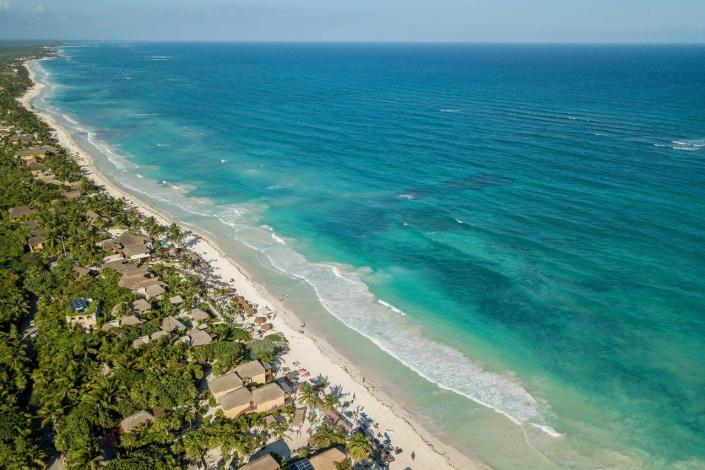 TULUM, Mexico — With its turquoise waters, white sand, and ancient ruins, this city has become an increasingly popular spot for tourists seeking a getaway along the Caribbean coast.

Its raves, nightclubs, and exclusive resorts and restaurants offer a quieter getaway than Cancun’s more famous neighbor 131 miles to the north.

But the increasing threat of violence penetrating Mexico has made its way here, as has the surrounding state of Quintana Roo. State Department officials warned Aug. 17 of an increased risk of violence for Americans traveling there.

While the U.S. government does not impose travel restrictions on its employees in Quintana Roo’s tourist hot spots, such as Cancun, Cozumel and Tulum, it is warning Americans to “be more careful about crime and kidnapping.”

Tourists are warned to “stay in well-lit pedestrian streets and tourist areas” in the wake of shootings between rival drug cartels in which bystanders have been injured.

American travelers warned of ‘kidnapping risk’ in some parts of Mexico

Travel Safety: 17 CIA Tips On How To Think Like A Spy And Stay Safe On Your Vacation

In October, two tourists were killed while dining at an open-air restaurant in Tulum. A month later, guests at a resort in Puerto Morelos had to hide while gunmen arrived by boat and killed two.

And in January, two Canadian tourists were murdered at a luxury hotel in Playa del Carmen, the same month the manager of a popular beach club was murdered in a restroom by two men who had fled on a jet ski.

The cartels’ influence in the region has increased as “tourism started to grow and when thousands of tourists came to this region, a market for drug trafficking was created for them,” said David Saucedo, a Mexico-based security analyst.

The prevalence of the cartels was immediately apparent when journalists working on this story were confronted by cartel members at two popular restaurants in Tulum.

When one of the journalists went to a toilet in the first restaurant, he was approached by gunmen who checked his pockets and ID and asked him several times what he was doing there and what cartel he worked for before finally letting him leave.

When the journalists moved to another place, the same thing happened again.

They left Tulum the next morning.

Tourists are easy targets for drug cartels, analysts say, especially when they come to sample the drug scene.

“Many tourists found the opportunity to use drugs while on vacation,” Saucedo said. “While other destinations in Mexico sold low-priced drugs like marijuana and cocaine, (and) in the Caribbean, hard drugs were on the market, so foreign tourists wanted this experience not only from tourism, but also from consumption.”

More than 160 people have been detained on suspicion of drug trafficking since January, Tulum police chief Oscar Aparicio said.

“It’s quite a number; we have raids every day,” he said. “As long as there is supply or demand, this crime will continue.”

Danger in the toilets

Two Tulum entrepreneurs who wished to remain anonymous for fear of retaliation from the cartels said tourism in the city has boomed after the worst of the pandemic has subsided.

“It became a very fashionable place,” said one.

But with the extra business has come the increasing threat of cartel violence, they said.

See also  Trump continues to bring in a lot of money, but shares little of his fundraising fruits with fellow Republicans

“Last year they (cartels) got a person to sell drugs in the toilets,” one said. “It’s extortion because you can’t say no to them.”

He described being visited by a trio of gunmen who told him that a man would be selling drugs from his toilet for the next three days.

But going to the police isn’t an option, he said, because business owners can’t be sure the authorities aren’t cooperating with the cartels, “and you never know what’s going to happen to you.”

Chief Aparicio said police are aware of the drugs sold in toilets and have taken steps to curb the trade.

“Unfortunately, many of the tourists who come to Tulum come precisely to get drugs and try things they haven’t tried in their country,” he said. “As long as people come and want to consume, this will continue to happen, and we won’t be able to get around it, even if we have 100,000 police officers on the beach.”

“Blaming tourists and saying that their actions lead to more crime seems to me an irresponsible simplification,” Tirado said. “It’s very easy to blame them, when in most cases some come just to visit the Tulum ruins.

“They’re talking about a drug trafficking problem, and the reality is that organized crime wouldn’t exist if there wasn’t complicity at all levels of government.”

Aparicio acknowledged the ubiquity of cartel hawks or halcones constantly watching areas — be it the juice seller or a restaurant waiter — to gather information and prevent drug dealers from getting caught.

“The National Guard is patrolling all the time, but these people have hawks everywhere who immediately inform their dealers so they hide or stop selling,” the Tulum police chief said.

But Aparicio disputed the claim that cartels were extorting companies, saying “It has been wiped out”.

“There are indeed drug cartels operating, local cartels that have been around for a long time, but we have not given access to other cartels in Tulum,” he said.

David Ortiz-Mena, president of the Tulum Hotel Association, agreed with the police chief’s assessment and said there is no extortion at hotels.

“If there has been an attempt – kidnapping, extortion in hotels – these have been adequately resolved by the response of the state,” he said.

But the two anonymous restaurant owners in Tulum said it would be naive to underestimate the cartels’ influence in the area. That became clear after they were so openly approached by a cartel member.

“I started to understand that the reality is that this is normal,” he said. “While I was shocked at first and suddenly a little paranoid, the truth is it’s going to be business as usual.”

Get travel advisories broken down by cities and states on the U.S. Department of State website.

State Department officials are encouraging Americans to “take 90 seconds to travel more safely,” by enrolling in STEP, the Smart Traveler Enrollment Program, which sends updates on travel warnings and enables U.S. officials to help travelers easier to help in an emergency.