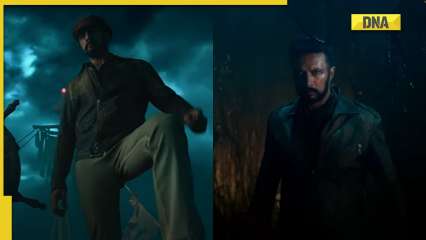 The trailer for Vikrant Rona, one of the most anticipated pan-Indian movies this year, was released by superstar Kiccha Sudeep on Thursday, June 23. Vikrant Rona, starring Jacqueline Fernandez in the female lead, promises a visual spectacle on the big screen with its dark setting and mysterious world.

Slated for release on July 28, the film was originally made in Kannada and will be released in Hindi, Tamil, Telugu and Malayalam. After the success of films like KGF Chapter 2, RRR and Vikram, Vikrant Rona is the next pan-Indian release awaited by moviegoers.

Kiccha, Jacqueline and director Anup Bhandari launched the trailer at a grand launch in Mumbai today. To stand out with their exit, they entered with a flash mob, with a few people dressed as Jacqueline’s character Kiccha and Ra Ra Rakkamma. The two stars were seen performing the song’s hook steps.

The film has the biggest names in the Indian film industry launching the trailer on their social media accounts in their respective languages. While Salman Khan launched the trailer in Hindi, Dhanush launched it in Tamil, Dulquer Salman in Malayalam, Ram Charan in Telegu and Kiccha Sudeep in Kannada.

Netizens are thrilled to see the magic of Vikrant Rona on screen and hence the makers decided to release the film in 3D. Sudeep fans expect the film to be one of the Kannada superstar’s richest films.

Also starring Nirup Bhandari and Neetha Ashok, Vikrant Rona’s Hindi version is presented by Salman Khan Films, Zee Studios and Kichcha Creations in North India. The film is produced by Jack Manjunath under his Shalini Artss Production and co-produced by Alankar Pandian of Invenio Origins. The film will be distributed in North India by PVR Pictures.

See also  Love Island 2022: Danica teams up with Luca as Remi is dumped from the villa